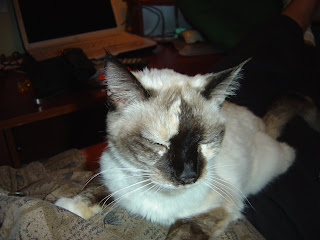 Our little Miss Beasley has decided that she needs to be as close to us as possible. She has always been the "most sociable" of the group that allow us to care for them but during this last year with her failing health she wants to be at our sides or in our laps constantly (which by the way, is OK with us).


Miss Beasley came to us as a stray some 15 years ago. She just showed up on our doorstep one day and refused to leave. We (I) tried desperately to find her owner to no avail and since our home was on a busy street we decided to make her an indoor kitty, and that was fine with her. She befriended our other kitty, "Puddams" immediatly and they became best friends. A couple of years later we "lost" Puddams to a stroke. Miss Beasley was alone for a couple of months before we decided we needed another Himmie. As some of you may know buying that one baby Himmie (Peekie) turned into rescueing two other adult Himmies (Cissy and La La) from the same breeder. Miss Beasley decided early on she was Queen of the house and did not like the new trio especially the baby Peekie. Peekie adoided Miss Beasley as much as possible but Miss Beasley seemed to enjoy going out of her way to torment her. After a couple of years "Cissy" decided enough was enough and put Miss Beasley in her place. That ended the picking on Peekie (who was much bigger than Miss Beasley). We said Good-by to Cissy last year after a long illness and La La has really come out of her "shy" shell. Peekie, La La and Beasley are good friends. 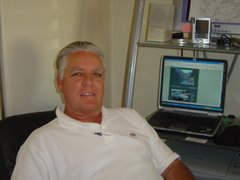 GB
I was born and have lived my entire life in the state of California. My parents moved to the little town of Thousand Oaks in 1959. The first year there, we did not even have a school. We had to go to school in makeshift classes in a cul-de-sac of new homes. The town has since turned into a beautiful town with a population of over 100,000. I married the girl I dated in high school and for some reason, she still keeps me around (35 years and counting). About 10 years ago we moved to a smaller community about 7-8 miles away in an attempt to re-capture that small town feel. Oh I forgot to mention that in 1976 we were blessed with the birth of a wonderful daughter. Our daughter married about the same time we moved (10 years ago) and now we are all getting ready to make the next journey in our lives. We are going to be moving to the Spokane area (in 2007) of Washington state. We are hoping to be able to buy homes as near to each other as possible (on acreage). Look out Spokane, here we come!